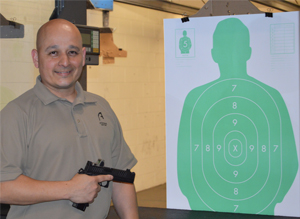 Gabe is a 23 year retired combat veteran of the United States Army. During his time in the military, he conducted multiple deployments and is a recipient of numerous awards for combat operations. While in the military, Gabe held multiple leadership and operational positions. He planned and led the training for numerous Paratroopers within the Airborne and Special Operations units. All in support of combat operations worldwide. He looks forward to sharing his many years of marksmanship knowledge and experience with students of all ages. In his spare time, Gabe
loves spending time with his family and traveling.