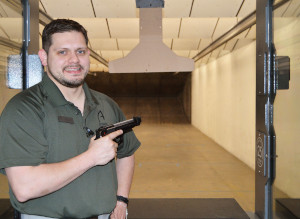 Daniel, a Houston native got his passion for firearms at an early age in correlation to his passion for hunting and fishing and being outdoors, developing a strong understanding for sporting firearms such as shotguns and rifles. Daniel immediately enlisted in the United States Marine Corps following high school and served an entire enlistment honorably as an Aviation Ordnanceman and re-enlisted in the Marine Corps Reserve as a Forward Observer for 3rd ANGLICO quickly earning the position of Team Chief to a Fire Control Team, simultaneously working private security for Boeing. Daniel enjoys building fundamentals and improving the already skilled marksman. Patience, Effort and Perseverance are his core qualities.
In his free time Daniel enjoys cinema of various genres and decades, as well as boxing and Muay Thai.