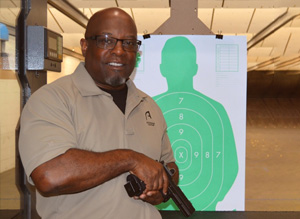 Mark Joined the US Marine Corps at 26, after honorably serving in both the US Army and Army Reserves.As an infantryman, Mark was a small unit fire team leader, chief scout of a Surveillance Target Acquisition Platoon, to platoon sergeant during his 17 years of service. Mark also trained Marine recruits in marksmanship at Parris Island, SC. and was a Physical Fitness instructor at the Task Force Training Center in Twentynine Palms,CA. After serving a combat tour in Afghanistan, Mark finished his career as the Staff N.C.O.I.C.in charge of the known distance rifle range at Marine Corps Base Hawaii, Kaneohe Bay. Mark thoroughly enjoys teaching and spreading the knowledge of elite level marksmanship, with his extensive knowledge and real world experience of placing rounds on target.